Adventures of Alex and Katie is a unique, fascinating and exciting series of early chapter books that take young kids on a journey into the magical world of Russian fairy tales. 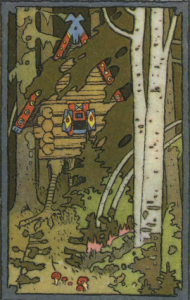 After their parents leave for Russia, Alex and Katie are left to spend the summer with their eccentric Aunt Karina. At first, the kids think that their summer is ruined, but when they discover a secret door behind the huge fireplace in Aunt Karina’s library, they sense that an adventure is about to begin. 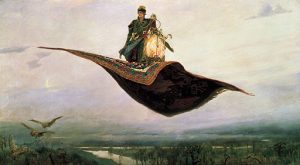 In each book of this unique chapter book series, Alex and Katie get a chance to change the outcome of a story and make their own decisions as they interact with the Russian fairy tale characters and learn life lessons. When the kids ask Aunt Karina why it is possible for them to change these stories, Aunt Karina tells them, “These are folk tales. It means that people can change them, and change their outcomes.”

There are six early chapter books in this series, available as paperbacks, Kindle ebooks, and audiobooks:

The Firebird: Adventure One 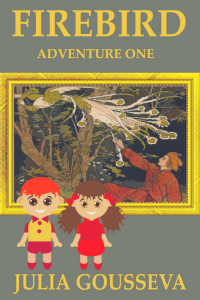 The first chapter book of the series is The Firebird.

Alex and Katie had just arrived to Aunt Karina’s house and discover that she has a bad leg that makes their aunt even stranger than all the weird little saying she likes to sprinkle in her speech.

She tells them that feathers of the magical Firebird can heal her leg and shows them a beautiful painting of the Firebird in a secret room behind her fireplace. The kids want to go find the Firebird. In his excitement, Alex stretches his hand onto the painting and discovers that he can step inside.

His younger sister Katie follows him, and their first adventure begins.

Listen to an except from the Firebird: Adventure One, narrated by Rebecca Lea McCarthy: 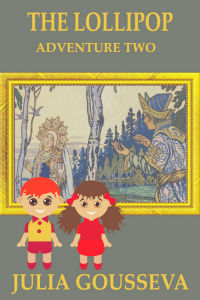 The Lollipop, the second book in series, takes Alex and Katie on a rescue mission. They have to save a young fisherman who was captured by an evil Russian tsar and thrown into a tower for the rest of his life.

His crime? He dared to talk to the tsar’s daughter, and the daughter fell in love with him, a commoner.

The tsar is furious, the princess is distraught, and the young fisherman is imprisoned.

Alex and Katie rush to help but get lost on the way to the palace.

When they stop by a log cabin to ask for directions, a scary creature in a sheepskin’s coat with green furry hands opens the door.

His emerald eyes shine a bright green light right at Alex and Katie.

Listen to an excerpt from The Lollipop: Adventure Two, narrated by Rebecca Lea McCarthy: 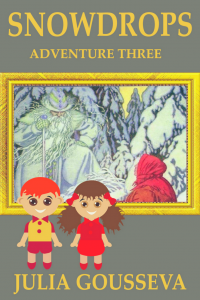 Masha, a little girl, got lost in the unexpected storm that could turn deadly.

Alex and Katie rush to the rescue. The wind is picking up, whistling through tree branches, creating white flurries on the ground and erasing Masha’s footprints.

In the distance, a person dressed in a white sparkling coat and a silver hat is walking between the trees.

The person turns around. It’s a tall elderly man with a long white beard. His brows are furrowed, and his eyes look cold and furious.

“Who goes here?” the elderly man bellows. “Why are you in my forest?”

He opens his mouth and starts blowing cold air at the kids and at the path, sweeping away all the footprints. Alex shivers from the mind-numbing cold.

“Stay calm and follow my lead. I know exactly what to do,” Katie says, and the kids are off to a new adventure!

Listen to an except from Snowdrops: Adventure Three, narrated by Rebecca Lea McCarthy: 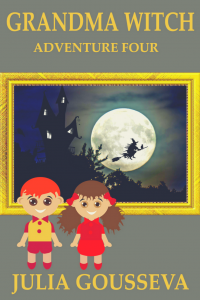 Baba Yaga, the Russian witch, captured the Guardian of Light and immersed the whole forest into total darkness.

It is up to Alex and Katie to save the little girl, defeat the evil dragon, and bring sunlight back into the forest.

Alex and Katie have to be brave and clever as they cross dangerous rivers, face the hut on chicken legs, create life-saving potions, and restore order in the world of Russian fairy-tales.

Listen to an except from Grandma Witch: Adventure Four, narrated by Rebecca Lea McCarthy:

Cinderella and Her Prince: Adventure Five 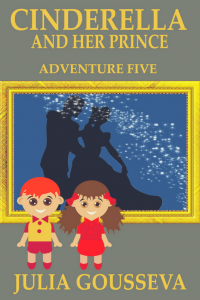 Cinderella is in big trouble. Her beloved Prince never came back from his horseback ride in the forest, and she feels devastated.

It is up to Alex and Katie to find the Prince and restore order in the kingdom.

But first, the two courageous and smart kids have to figure out what happened. Did someone kidnap the Prince? Is he still alive? And will he and Cinderella ever be together again?

It is up to Alex and Katie to solve this mystery, rescue the Prince, and help Cinderella live happily ever after.

Listen to an except from Cinderella and Her Prince: Adventure Five, narrated by Rebecca Lea McCarthy:

The Nutcracker and the Christmas Spirit: Adventure Six 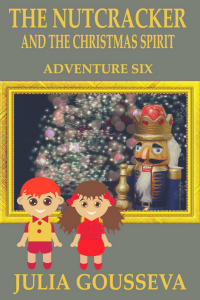 Alex and Katie are on a new adventure: they need to save the Nutcracker and the princess from an evil spell. They step through the magical painting and enter a snowy town on Christmas Eve.

The kids see a sleigh and an elderly man in a long coat delivering gifts. They rush to him only to discover he is not who he seems. Will Alex and Katie be able to save the Nutcracker, find the princess, and crack the magical walnut before the clock strikes twelve?

“The Nutcracker and the Christmas Spirit” is a fast-paced and exciting adventure with a message for the season: the power of the Christmas spirit can melt the darkest of hearts.

Listen to an except from The Nutcracker and the Christmas Spirit: Adventure Six, narrated by Rebecca Lea McCarthy: